The form that would have helped Kimi Raikkonen to the 2008 World Title has finally turned up.

10 years too late, the form – constructed from a mixture of lukewarm commitment and luck – allowed the Finn to out-perform his championship chasing team-mate Sebastian Vettel at the Italian Grand Prix thereby ensuring the immediate cessation of that status.

Said the form, “I’ve been hanging about in the ether for 10 years not doing very much. Frankly I thought there was zero chance I’d ever actually get used.” 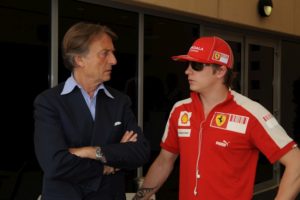 “Then all of a sudden: whoosh!!!! Here I am – belated, unwanted, unfathomable. Pretty much like Kimi in fact.”

The Finn was a championship contender in 2008 until he mysteriously went off the boil and has been cashing cheques ever since, apparently because pissing your talent up the wall whilst finding the media overtly boring is cool or something.

Now a decade after it looked like he might give a shit about anything the Finn has finally driven almost as quickly as when he was young enough not to have it occur to go a bit slower or realise he could get away with doing that forever.

“I’m sure invoking this form thereby condemning Kimi to remaining the most recent Ferrari World Champion hasn’t occurred to him,” continued the form.

“Actually, I’m certain it hasn’t. I think he knows he has a wife and kid and works as a racing driver. The rest is a bit of an inconvenience.”

“Apart from the eye-watering salary, obviously,” he explained.

Paid to be the baddie, Ecclestone defence trial told