Stoffel Vandoorne has asked if that’s basically his motorsports career and what the fuck was the point of any of it?

The 2015 GP2 Champion has been given the boot at current employer Mclaren after 2 fruitless years pedalling its shitbox round the globe whilst team-mate Fernando Alonso buried whatever positive reputation he still had by out-performing him so often even the Belgian started to doubt the point of his own existence.

Said the already half-forgotten Walloonian, “all those years of sacrifice. Of pain. Of unbelievable expense. The training. The accidents. The hours and hours being driven up and down the motorways of Belgium by my parents to some track in the middle of nowhere in the pissing rain.” 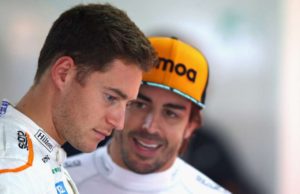 “The 7 sets of Sparco suits I grew out of. The boots. The flameproof underwear. The helmets – Jesus Christ; the helmets.”

“All to end up at this giant turned basket case that makes Leeds United look like a model of level-headed probity. The horror, the horror!” he concluded.

Vandoorne had an almost spotless reputation before he arrived at Mclaren whereupon it all fell to bits faster than his Honda power-unit did.

And don’t get him started on the current Renault powered career coffin single-handedly downgrading the Tango man to the 2nd funniest orange-themed branding gig.

“What the fuck do I do now? Go on a gap year? I’ve already fucking been everywhere,” the suddenly very old looking 26 year old wailed.

Rubens record start: “in 1993, all this was Brazilians”