Medical researchers have claimed that the Fernando Alonso virus has finally been defeated.

The non-bacterial pathogen has been the scourge of the F1 paddock for 17 years, consuming a number of high-profile victims as it veered erratically from team to team before finally meeting its own maker during the summer break.

Boffin Brian Boffin of Leeds Viral Research Laboratory said, “scientists and team principals have been battling Alonso fruitlessly for nearly 2 decades with no apparent end in sight when a breakthrough was finally made.” 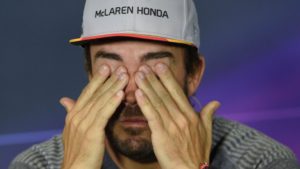 I have to shoot myself then do I?

“Although the breakthrough was mainly Alonso itself which appeared to essentially self-combust in the face of its own destructiveness.”

“On balance probably pretty predictable, quite honestly,” he explained.

The virus operated by attaching itself melodramatically to an apparently willing host then consuming that host with a powerful series of demands that left it’s victim exhausted and quite upset.

“Now Alonso has been defeated, the F1 paddock can finally sleep peacefully in their beds,” Boffin explained.

“Mainly the mediocre, lazy ones granted but everyone counts,” he added.