Suggesting she would step aside if asked to by the team she runs because her dad owns it, Williams simultaneously pinpointed the cause, effect and unlikely solution to all the team’s problems whilst failing to realise she’d done that.

Williams watcher, William Walliam warbled, “Claire Williams could only be asked to step down by somebody above her, i.e. her dad.” 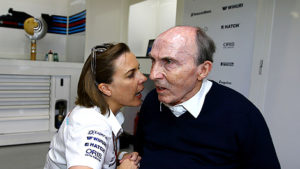 I said, “WHO ARE YOU AND WHAT ARE YOU DOING IN THIS GARAGE?”

“Unless she decided to confront herself which quite frankly I wouldn’t put past her.”

Williams was a brave appointment to CEO of her father’s racing team in the sense that a Bonobo was about the only braver option.

Since then, the jolly hockey sticks private school demeanor has been gradually replaced by professional Northerner Head of Performance Rob Smedley, coincidentally as the whole thing has turned to shit.

“Replacing Williams with a glass of sherry would be an improvement,” Walliam explained.

“But her dad – a Knight of the Realm, a collector of serial F1 titles – would have to admit a bottle of fortified wine could do a better job than his own flesh and blood.”