Williams are agog at the state of its 2018 driver line-up.

Arriving at Melbourne full of confidence for no obvious reason, the team from Grove spent the rest of the race weekend realising to their horror they’d hired an absolute pair of tuggers with which to complete the season.

Technical Director, Paddy Lowe said, “we don’t understand as we’d carried out all the necessary due diligence for assessing their performance prior to the season.” 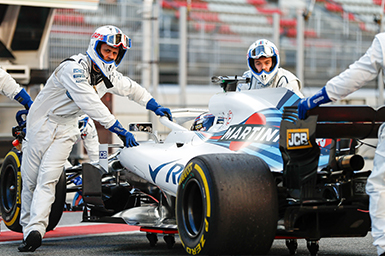 Just keep going until we get to that cess pit out the back, lads

“We’d checked their bank balances, got a full independent assessment of their assets and their cheques didn’t bounce.”

“I honestly don’t know what else we could have done,” he offered in exasperation.

Williams were heavily criticized in 2017 for giving one of its race seats to unknown quantity, Lance Stroll.

But the team vigorously defended itself, pointing out that they knew exactly the quantity given it had been written on a cheque by the Canadian teenager’s billionaire father.

“Both Sergey and Lance’s finances are totally legit; there are no shady middlemen; the contracts aren’t owned by third parties based in the Cayman Islands.”

“Yet despite all this it turns out they’re shit at driving. Go figure,” he said, pointing at some particularly big ones on an invoice.