Draped in exclusive gold ornaments, dressed head to toe in expensive fur coats, the Williams team vehemently denied their hiring of Sergey Sirotkin was down to his substantial financial backing.

Spearheading the collective denunciation in a Chanel jacket, sunglasses and Anna Sheffield sapphire necklace Claire Williams said, “the idea we hired Sergey because of his money is absurd.”

“It was entirely thanks to the unique gifts he brings to the sport,” she struggled above her clanking jewellery. 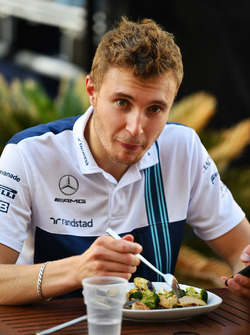 Can kill you with just his wallet

“Which were it not for this eye-wateringly expensive restrictive clause in his contract, I’d be more than happy to tell you about.”

Following the exit of cry-baby slaphead Felipe Massa, the Williams team have been on the lookout for a driver sufficiently talented to replace the niggly failed Ferrari driver’s role as the distant spot on the horizon for retail conglomerate offspring spoilt bastard, Lance Stroll.

Or failing that, somebody with a shit load of money to keep everyone in a job for another year or two.

“It’s wrong to say Sergey is only here because his 30 million dollars allows my family to remain in our super duper big mansion and everyone else to keep up to date with their mortgage payments.”

“He brings a refreshing don’t-fuck-with-me demeanour, experience of an engine much worse than the one we actually have and as a diverse employer its important to make room for minorities like Russia.”

“Apart from Paddock Club obviously. There’s bloody hundreds of them in there,” she added.