Helmut Marko has jumped at the chance of properly burying Brendon Hartley’s career by hiring him to drive the 2018 Toro Rosso-Honda.

The 2015 World Endurance Champion thought his F1 days were numbered before the Austrian bastard found his number on the back of a beer mat wedged in his rolodex and decided the Kiwi didn’t know what numbered meant.

Said the heartless Tyrolian, “I’d had a pretty good year throwing Daniil under the company bus but in my line of bloodsucking shitmeisterness was still looking to fuck up at least one other driver’s career before 2017 was up.” 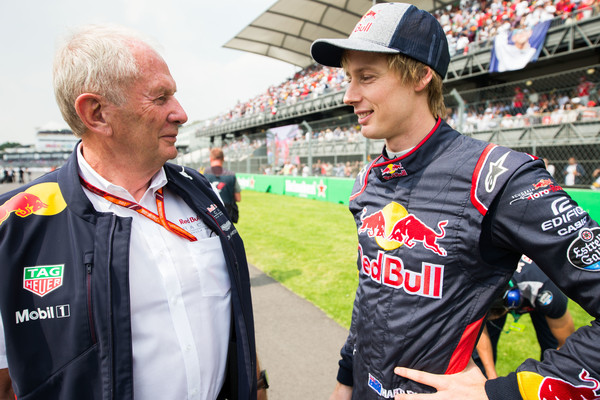 I’m going to well fuck you up

“And then I found Brendon’s details under some congealed blood at the back of my torture room and I was so excited I accidentally killed this puppy I was asphyxiating.”

Hartley was once a member of Red Bull’s junior talent roster before he had the misfortune to try out for the F1 team.

He was swiftly crushed into admitting his own abject incompetence in a quasi-religious ceremony in which the Kiwi was dressed just in his underpants and a Dunce’s hat whilst senior members of the fizzy drink company continuously urinated on him having consumed solely their product for the previous 48 hours.

He agreed to pay back his Red Bull sponsorship at 18.9% APR and had to drive Le Mans cars in front of up to 35 paying spectators.

“Brendon thought he’d found redemption in the form of the 2015 WEC title,” Marko continued in a black cape, stirring a big pot of congealed human remains over a fire kindled from the powdered remains of Scott Speed.

“But now he’s going to wish he’d drowned in that spray of caffeinated piss when he sees the psychological warfare I’ve got lined up for him in 2018,” he cackled over the stench of burning human flesh.