Fernando Alonso is already boring the shit out of anyone he comes in contact with by yelling, “I told you so” at them.

The 36 year old ex-world champion has spent the last 3 seasons driving a clown car whilst putting up with gibes about how well previous employer Ferrari are doing.

But now the Scuderia have predictably imploded the Spaniard is keen to tell all his previous tormentors to go fuck themselves whilst waving a picture of one of the red cars with smoke pouring out the back of it. 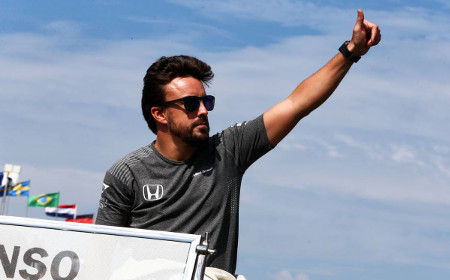 Swivel on it, haters!

“I TOLD YOU SO!!!” the Mclaren driver was seen screaming into people’s faces around the Suzuka paddock.

“I FUCKING TOLD YOU!!! THEY’RE MORE SHAMBOLIC THAN THIS LOT!!!”, adding, “THEY’RE SHIT: THEY’RE FUCKING SHIT!!!” so loudly, a series of Shell garage anniversary tumblers shattered in the Mclaren motorhome.

Ferrari had been running neck and neck with winners of the previous 3 years’ championships Mercedes before remembering who they were and comprehensively going all Fubar on whatever remote chance they might still have had to win it.

Rosberg to drive faster in 2016