The Force India VJM10 being smashed to bits each week is wondering if its pink livery has anything to do with the drivers suddenly behaving like they’re in Rollerball.

Since switching to the effeminate hue, drivers Esteban Ocon and Sergio Perez have violently thrust their mounts at each other some half a dozen times, apparently enraged by their darling-tinted racecars.

Said the midfield dynamo, “I’ve been a number of colours in my time and had a similar number of dickheads driving but I’ve never witnessed anything like it since they decided to dress me up like a giant candy floss.” 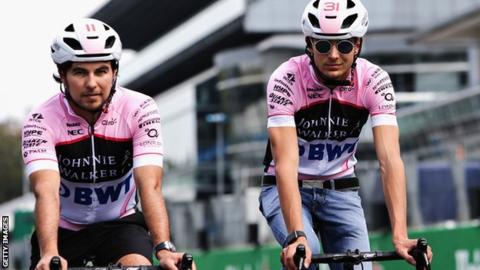 We’ve no problem with gays unless you suggest we are, then we’ll drive you into a wall

“I can only assume this livery has provoked them into becoming a pair of priapic knuckle dragging cavemen intent on signalling their driving prowess in the most pugnaciously male way possible.”

“If they’re not shagging the grid girls over the rear wing whilst balancing a pint of real ale on the sidepod by Singapore, I’d be surprised,” it speculated.

Pink, coral, fuschia or blush has in the latter half of the 20th Century been largely associated with girls’ attire and more recently – with the rise of gay rights – homosexuality; following the publication of the LGBT targeted Pink News in 2005.

It is also a shit singer who compared her life to Vietnam because having once seen Platoon, thought it was alright to compare jungle warfare to having your mother fleetingly regret your existence.

“I’m not saying painting me blue will solve this but it’s got to be worth a try to save one or other of them somersaulting into the paddock,” the peach-tinted single seater continued.

“Probably with a massive boner.”