Lewis Hamilton has not revealed his more twattish elements to new team-mate Valtteri Bottas yet and so the pair of them are getting along like a house on fire.

The 3-times world champion revealed that – compared to all the other team mates he’d had – his relationship with Bottas is the best yet: even before the Finn had met his dogs, wardrobe assistant, posse or music collection.

Said the incumbent Mercedes driver, “the minute I started working with Valtteri we had a good feeling.” 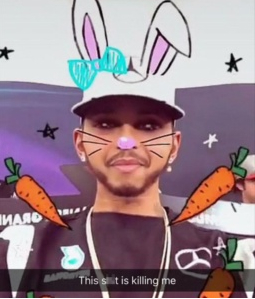 Wait till I show Valtteri *this*

“We’ve only talked about the car so far – the car and the team – but I’m sure we’ll get on even better when I play him this CD of music I’ve created over the winter and he gets to play fetch with my 2 dogs for a couple of hours.”

“I think that’s when the real depth of the relationship will come out,” he predicted.

Bottas was thrust into the Mercedes role after Nico Rosberg’s sudden retirement coming as a shock for anybody who hadn’t had to experience what it’s like to be Lewis Hamilton’s team-mate for 4 years.

The Finn was previously partnered with Felipe Massa at Williams so will not only have to cope with the Englishman’s blinding speed but also his use of the word “blessed” at least 20 times before breakfast.

“There’s no attitude to Valtteri at all,” Hamilton continued.

“I can’t wait to go through this book of tattoos with him: I’m sure our relationship will really kick on from there.”