Attempting to fashion a response synthesising the precise level of boredom, weariness and disdain towards his now ex team mate’s painting-by-numbers mind games whilst simultaneously not being arsed to do so, Rosberg chose the verbal shoulder shrug as the most appropriate reaction.

Paddock pundit, Rex Wrexham pundited, “Lewis hasn’t yet grasped that Nico having a wife and baby isn’t some devious sporting contest mindfuck but a normal thing most 30-something blokes do.” 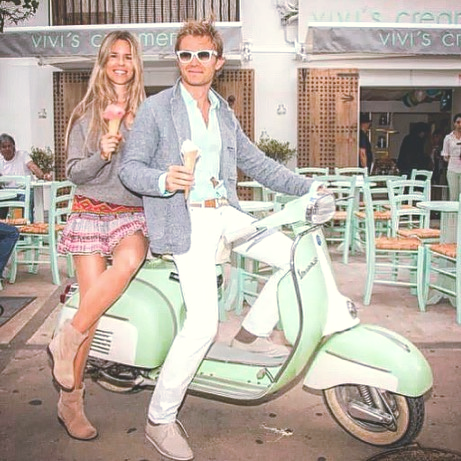 Bye, Lewis!  Have fun with what’s left of your body stencils

“When they have stuff other than tattoos, dog shit and how many dickheads you can fit on the wing of a Lear jet to occupy themselves with.”

Congratulating Rosberg whilst sounding like his dad had made him do it, Hamilton suggested the otherwise shock retirement announcement was totally predictable because otherwise it would look like Nico had outsmarted him with all his languages and science and shit.

The German later sent a Christmas card with no forwarding address to his Mercedes rival featuring a picture of himself, his wife and baby happily waving goodbye during an idyllic sunset saying Lewis could pop over any time as long as he sent notice in perfectly written German 12 months in advance, first.