Daniel Ricciardo’s shoes are massively relieved after their wearer’s 3rd place position was only rewarded once the Mexican Grand Prix’s podium ceremony had finished.

The size 10 Sparcos were initially under the impression they were perfectly safe given they were attached to a driver that finished 5th but whilst drying on a Red Bull radiator, started to panic when they got wind their owner had been promoted as a result of rule violations for drivers finishing ahead of them on the road.

Said the right one, “anyone who thinks it’s fun being drowned in a mixture of spittle and Moet then sucked at by the star of Olympus Has Fallen needs their head examining.” 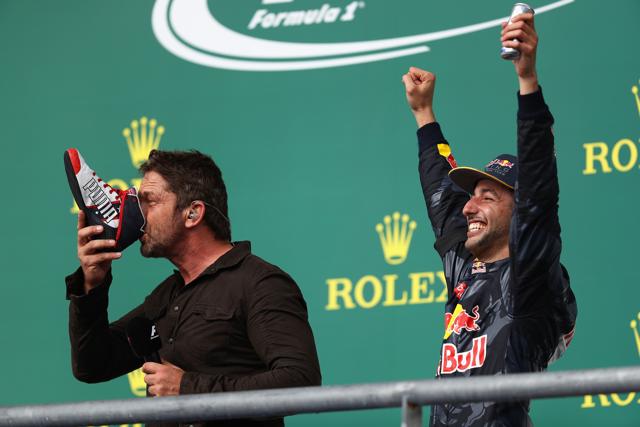 “But apparently loads of people think it’s cool so every time it looks as though Daniel is going to finish somewhere in the top 3 we both start regretting ever meeting up in that Dhaka sweat shop.”

The always jovial Australian except when he isn’t has taken to removing one of his shoes during podium ceremonies, filling it with champagne and either drinking from it or inviting people too terrified to object to do the same.

Nicknamed the shoey because adding a Y to the word shoe is well within the mental capabilities of most Australians, the 27 year old never once asked if his footwear were happy with the arrangement however.

“I haven’t been this relieved since Dan threatened Christian Horner after Monaco,” right continued.

“If he hadn’t taken that step to the left I’d have been washing sweetcorn out of my toe cap for a fortnight,” he explained.