The F1 technical working group is considering introducing a mandatory driver swearing period for each race from 2017.

After a Mexican Grand Prix that was somehow elevated to exciting following the broadcast of Sebastian Vettel’s obscene vituperations, the rule makers of the sport have leapt at the chance to incorporate it into all future events.

Technical Working Group fuck face Charlie Whiting said, “F1’s rule makers are always looking for exciting new ways to improve the sport and judging by the fans’ reaction to last week’s caustic language it seems only reasonable that we should have obligatory abuse as part of the rule book.” 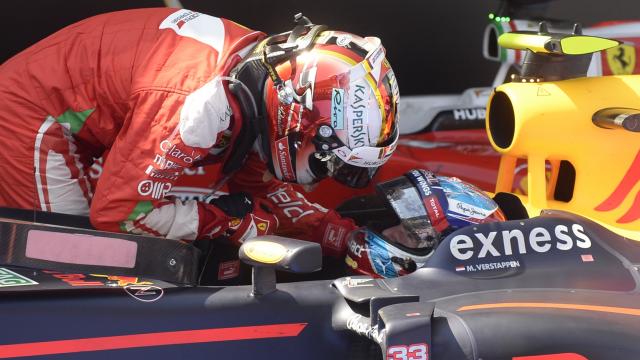 And now we’re off air, I can tell you what I think about your dad as well

“As opposed to its casual intermittent usage by the audience towards what’s unfolding on screen,” he explained.

Driver radio communications have created a dramatic new texture to Grand Prix racing ever since FOM decided fans’ enjoyment of the sport could hardly be made duller by listening in to multi-millionaires whining at their pit crew every other lap.

But it’s only since Vettel’s voice found its motherfucking mojo that F1’s rule makers spotted an opportunity to keep the audience awake long enough for the next ad break.

“Barely 15 minutes of a 2 hour broadcast contains driver radio most of which is restricted to boring messages about how the tyres are going off or how much fuel is left,” Whiting continued.

“But if we legislate drivers to communicate with obscene language for at least 2 minutes per race we could easily double or even triple that period making the whole Grand Prix experience much more entertaining for fans.”