Mark Webber has finally erased the terrifying memories of his Valencia 2010 crash by replacing it with the even scarier memory of drinking champagne from Daniel Ricciardo’s shoe.

The 40 year old ex Red Bull driver was offered the chance of redemptive memory loss by his compatriot, immediately recognising the potential it had for removing the one thing – apart from Sebastian Vettel, Christian Horner and that other time he flipped a Mercedes in 1999 – still keeping him awake at night. 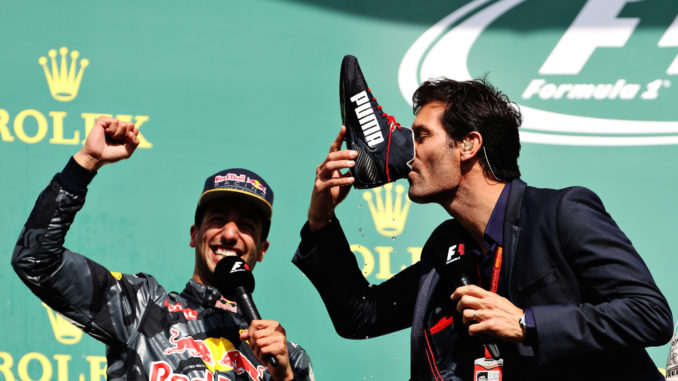 Maybe I should have just sawn my head off, after all?

“But now that’s all behind me as from now on I will only ever recall the 28th of August 2016 with everything else just a hazy, less traumatic memory in my rear view mirror,” he explained.

Webber’s 2010 Valencia crash involved the Red Bull driver misreading the movements of Heikki Kovalainen’s Lotus in front of him, hitting the Finn’s car and flipping his own in the resulting 170mph horror smash.

But whilst it may have looked cool on TV, it left any hope of a good night’s sleep along with the contents of his colon firmly ingrained on the Spanish seaside city’s promenade.

“Now at last I can rest,” Webber explained.

“With just the stinging, fetid aftertaste of sweat, athletes foot and Staphylococcus bacteria lingering at the back of my throat till the end of my days.”

“It’s absolutely worth it,” he confessed.

Rubens record start: “in 1993, all this was Brazilians”