Making a series of pit-stop, strategy, engineering and driver retention mistakes the Scuderia now only have a couple more to do with fucking up next year’s car, not properly replacing designer James Allison and re-hiring Maurizio Arrivabene.

Said the gruff-voiced ignoramus, “at the beginning of the year we set ourselves the target of competing with Mercedes.” 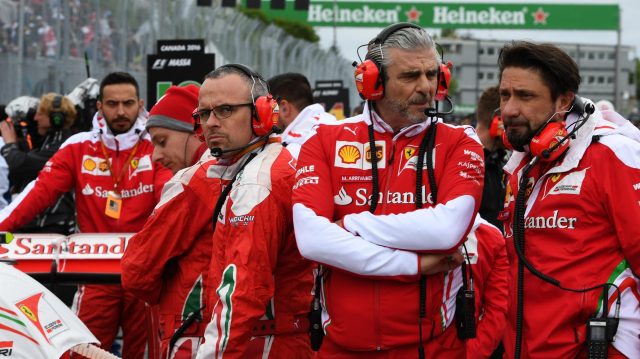 Which strategy mistake is this again?

“Then once that went out the window we made ourselves the target of maintaining what everyone loves about Ferrari: a sequence of seemingly never-ending comedy errors that reflect our Italian heritage.”

“Though I can tell you now, they’re not never-ending – there are 25 of them and they’re all on a list,” he explained.

Ferrari fans could barely believe their eyes when the team lost races thanks to pitstop strategy errors which has been compounded by a loss of form and the re-hiring of barely-awake 2007 World Champion, Kimi Raikkonen.

But then everyone remembered this was Ferrari they were talking about and instead started wondering when the next cock-up was going to happen.

“We’ve got a pitstop where everyone is watching the track when the car comes in, an enforced engine change when we grab our first pole and short-fueling the lead car,” Arrivabene continued.

“Or bad, depending on how you want to look at it,” he clarified.

Ferrari to send Double Points rule back to 2010

Kvyat still deciding whether to cry on the outside