Seagulls have told Sebastian Vettel they won’t land on his poxy track so long as he keeps out of their fucking sea.

The massive, shitting seabirds squawked their opinion after the German had claimed their presence on track at the recent Canadian Grand Prix had compromised his race performance.

Said a member of the Laridae family, “he’s got a nerve moaning about us when you should see how often we’ve seen him frolicking in the Med, pissing in it.” 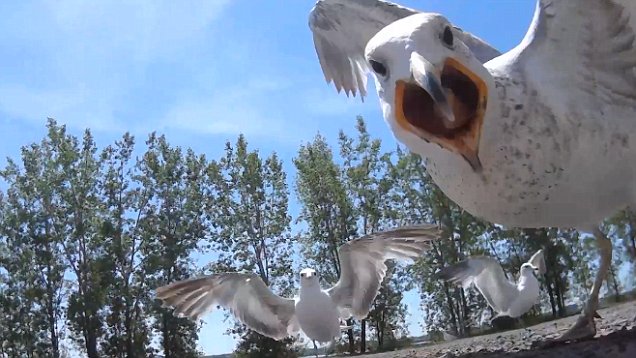 What are you looking at, prick?

“This island shouldn’t even exist: it’s fucking artificial. My ancestors used to land here when it was water to catch herring.”

“Or it might have been to eat stolen chips – how the fuck should I know; I’m a gull,” it threw its head back and wailed.

The Ferrari driver went off the track several times on Sunday in an attempt to chase down Lewis Hamilton’s leading Mercedes and landed on the aggressive seabird’s territorial indifference as the most plausible explanation for his inability to steer and brake at the right time.

“Humans turn up – millions of years after the rest of us evolved – thinking they can fill in the sea and dump a couple of miles of tarmac down whilst the rest of us can go to hell,” continued the Lari sub-order genus.

“Well, I’ll tell you something: ooh, look – chips!” he said, flying off to divebomb a child.