Daniil Kvyat took the opportunity to show Vladimir Putin in person why invading a Western European country just won’t work like it did in Ukraine and the Crimea. And Georgia. And Chechnya. And Syria.

The 22 year old slammed repeatedly into the back of former Red Bull alumni, Sebastian Vettel until he felt he’d adequately made the point about pyrrhic victories or something right in front of his belligerent fellow Russian President.

Said the temporarily employed driver, “people may think I look and sound like a gurgling stick insect but that doesn’t mean I don’t care about world peace.” 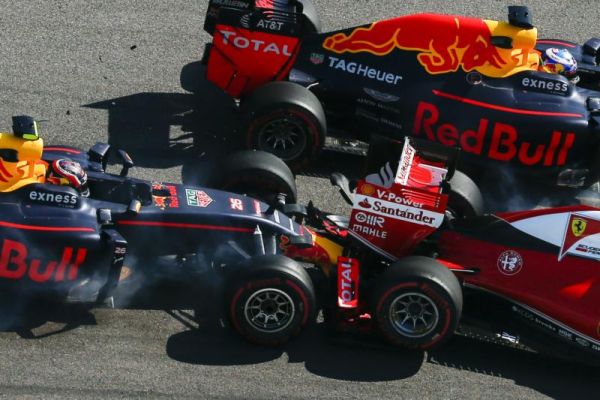 You should have seen my Interpretive Dance version

“Aware of my country’s current reputation I decided to take the opportunity in front of our wonderful Leader to demonstrate why – even if you think you have the upper hand of surprise and aggression – an apparently positive outcome can ultimately end very badly.”

“I then planned to leave Russia in a heavily armoured stealth submarine locked within a lead casket,” he explained.

Yet even as the German extricated himself from his stricken Ferrari in a string of invective, the apparent Teutonic usurpation by an agent of the glorious Russian Motherland was unravelling against incurred accident damage, a time penalty and the thought of those steel capped cowboy boots Helmut Marko had waiting for him back in the garage.

Which just shows crime never pays or something like that, the human daddy longlegs expanded.

“Victory is fleeting and temporal and violence only seductive in the visceral moment of its terrible application,” Kvyat continued reading from a piece of paper.

“The easiest prize is not always the best prize and….can I go and sit in a bath of ice now, my arse hurts?” he added, crabbing away whilst pulling a spur out of his buttock.