Pastor Maldonado is pointing out he won the Spanish Grand Prix as well and what’s all the fuss about?

The Venezuelan exited Formula 1 in 2016 under a cloud of carbon fibre shrapnel when his accident bill finally exceeded the value of his insurance excess.

But, the 31 year old gesticulated at teenage sensation Max Verstappen, he also had a victory to his credit which just so happened to be at the self same Spanish Grand Prix. 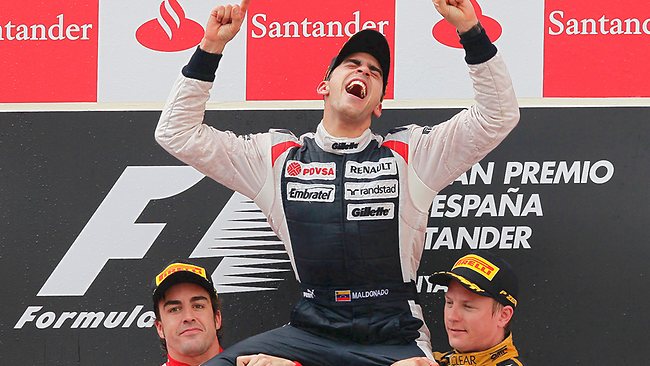 Said the lisping maniac, “if Verstappen’s not careful, all this hype over his victory will go to his head and he’ll end up making a bunch of mistakes thereby ending a promising career.”

“Something I totally avoided, obviously.”

The Man Most Likely To Have An Accident On The Way To The Grid had what was described as a chequered career in the same way a teacher might if after being caught nicking all the kids lunch money they were also rumbled for sleeping with a couple of 15 year old girls from the Home Economics class.

“For 66 laps I held off Spain’s greatest ever racing driver and yet my single Grand Prix victory doesn’t get half the coverage the 40-odd accidents I had before and after did,” Maldonado continued.

“I just hope Max doesn’t get the wrong idea and start crashing and spinning off every 5 minutes.”