Romain Grosjean’s comparison of the Haas top 6 result to a win just shows how much the Frenchman’s forgotten about what that’s actually like.

Qualifying comfortably in the bottom third of the grid, a red flagged topsy-turvy Australian Grand Prix saw the remaining American team’s car shoot up the finishing order at its inaugural race to come home a highly credible 6th – though it’s not a win is it?

Nevertheless, the 29 year old commented, “this is exactly like a win!”, even though he hadn’t actually won anything since 2008 so how the fuck would he know? 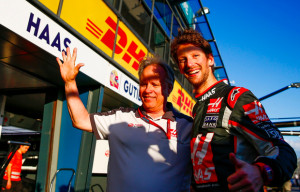 Head of the People Forgetting Things Department at the Institute of Memory Loss, Professor Thingamybob said, “cognitive dissonance driven hyperbole has significant prevalence amongst individuals used to making kneejerk comparisons for the benefit of the media.”

“Or to put it another way: sportsmen will come out with any old bullshit at the drop of a hat once you put a microphone in front of them.”

“At least: I think that’s true, I honestly can’t remember.”

Grosjean is gearing up for the remainder of the season where he will be looking to compare a podium with a championship and a fluked win with something metaphysically impossible even in a parallel inverse reality universe.

Bourdais farewell triggers vague memories he was driving this year