Ron Dennis believes the F1 world would have a completely different opinion about his Mclaren cars if only all this writing wasn’t obscuring its inherent beauty.

Following the loss of its Tag Heuer sponsor to Red Bull Racing, Dennis’ cars will go into the 2016 season sporting a stencil of a 19th Century upper class gent in whatever 3 colours Ron has allowed their YTS graphic designer to use.

Said everyone’s favourite automaton F1 team boss, “it would be easy to say that losing yet another sponsor is a sign of the terrifying slump Mclaren has fallen into when even a wannabe ersatz Breitling would rather splash its logo on the side of a carbonated drinks billboard.” 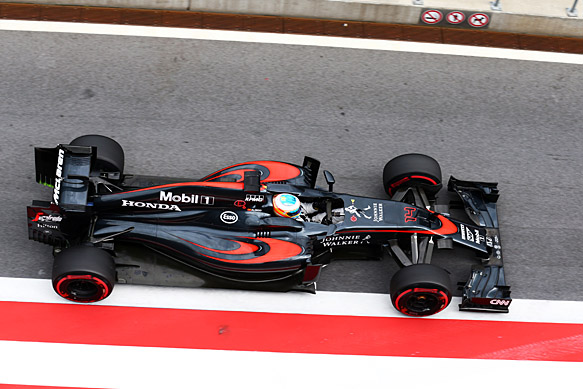 Maybe get rid of that Honda sticker as well, yeah?

“But actually I consider this a glorious opportunity to demonstrate the inherent beauty of Mclaren’s engineering by indicating our cars’ smooth lines without a bunch of graphics cluttering it up.”

“So I keep telling myself to prevent my panic attack from kicking in every time I wake up suddenly in the middle of the night,” he confessed.

Design guru Ned Gravy said, “Mclaren heritage is chock full of cars elegantly accentuated by the bold patterns of cigarette manufacturers eager to get children hooked on their products by making the cars look like fast moving boxes of fags.”

“With this statement Ron is saying: the imposition of capitalist branding denigrates rather than empowers our aesthetic and I will prove this by removing as much of it as possible in the pursuit of the purity of form and function.”

“Or it could be that they’re such dogshit Mclaren have become toxic to everyone except mass-market booze pedalers.”

“One or the other, I expect,” he explained.