Red Bull are livid the current Renault engine is so lame as it has taken all the focus away from their brilliantly dubious rule bending.

All through their current engine malaise, the fizzy drink emporium has been just as busy re-interpreting the rule book, innocently exploring the outer reaches of engineering parameters and blatantly making various thing much bigger or smaller or more flexible than they should be.

But whereas in the past such fraudulence gained media notoriety amongst the white heat of a Championship fight, the same sort of stuff edging out Lotus means nobody gives two shits any more. 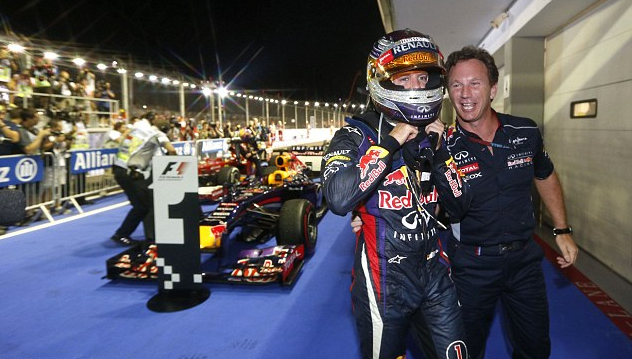 Team principle, Christian Horner said, “Red Bull have always been super innovative and it’s a shame this aspect of our team is being missed just because every week we’re jumping up and down and crying about how shit our engine is.”

“Honestly: if you could see some of the ways the guys have “re-interpreted” the rule book, Charlie Whiting might as well keep the rules in his head to save re-writing them every 10 minutes.”

Horner insisted the level of effort going into pulling the wool over everyone’s eyes was just as intense and world-beating as ever even with the extra pressure of having to tear strips off their technical partners as publicly as possible every week.

“Half this car is illegal really but the engine’s terribleness is masking our otherwise world class shystering,” the Harpo haired 43 year old admitted.

“It’s a really terrific bunch of charlatans we’ve got working here and it just upsets me they don’t get the credit they deserve,” he added.