Kimi Raikkonen has insisted that his apparently kamikaze move on Valtteri Bottas at the recent Russian Grand Prix was entirely legitimate given how pissed he was.

The 35 year old part-time alcoholic and Ferrari employee was seeking to defuse criticism the Finn encountered following the last lap banzai move on his fellow compatriot.

Said the mumbling ‘personality’, “I know from the outset that looks like one of the dumbest overtaking attempts this season from anyone who’s name isn’t Maldonado“. 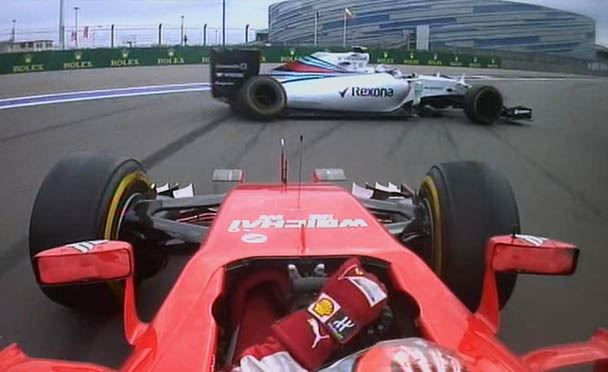 “But if you’d seen how many Smirnoff Ices I’d downed even before lap 10, you’d have thought differently.”

“Absolutely anybody would have gone for that gap – if there was one. To be honest I was so pissed I can’t remember.”

But if only you knew how many WKDs he was putting away before he even got to the paddock most mornings, frankly you’d say he was ahead of the 4-times world champion.

“Have you seen how many bottles are in his footwell? When he comes back to the garage it sounds like a milk float parking up,” said his engineer, David Greenwood.

“I think he’s being unfairly maligned. It’s hard enough doing what he does with a static stretch of tarmac but when Kimi goes out the track is moving more than his car is: he’s amazing!” he hiccoughed.