The Mclaren Honda marketing team have spent the August break figuring out really good reasons for them being this shit next year as well.

When not busy not doing anything during the enforced shut-down, the Marketing boffins at the once-great Woking outfit have been beavering away at polishing bullshit strategies.

PR head honcho Matt Bishop said, “the enforced lay-off is a really good opportunity for everyone to take a deep breath, take stock and – in our case – stare at the clusterfuck before us and go down the list of excuses we’ve not tried yet.” 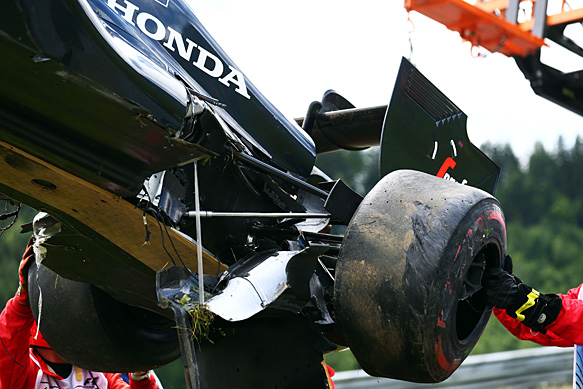 It err…fell down the stairs

“We can then see which are left for the rest of 2015, which can be recycled and get down to some blue sky thinking for the inevitable shambles apologising we’ll be doing most of next year, too.”

Mclaren Honda began their racing partnership at the Australian Grand Prix in March and have been gradually staggering round the rest of the world’s Grand Prix tracks like a drunk gradually succumbing to liver disease.

The cars have been described as gutless, insipid, catastrophically slow and driving one like, “going lawnmower racing whilst still attached to the mains.”

And that’s just by the drivers.

“The Hungaroring was a blow to us psychologically as it accidentally provided a boost in performance: the main thing we weren’t planning for,” Bishop continued.

“But don’t worry: we’re going to be totally nipping that fucker in the bud at Spa, I can tell you,” he added.