Force India’s Hungaroring accidents were because the circuit attacked it, the team has claimed.

And nothing to do with a recent economy drive wherein the recently updated VJM08 car is now held together with Araldite and Juicy Fruit.

“Extensive investigations by the team and my accountants have concluded the apparently unfathomable spontaneous failures on both cars were the result of cruel retribution undertaken by the Hungaroring circuit,” said Vijay Mallya, that fat bloke with inexplicable earrings. 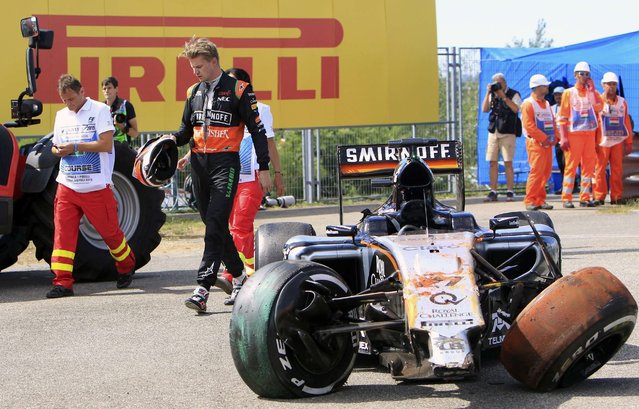 And you’re a kerb crawler, sunshine

“Which I admit: sounds fucking mental now I’m saying it out loud.”

But the team’s boss rebutted allegations it was down to staff not bothering to follow the instructions and leaving out half the components like out of an Airfix kit with counter-accusations the circuit was out to get it.

“At a pre-race event hosted by my team at which rather a lot of our sponsor’s rocket fuel may have been involved, I attempted a Hungarian pronunciation,” the Mumbai Booze-Busters billboard boss explained.

“Mangling this phrase led me to make an inadvertent remark about the circuit in sheer frustration: I wholeheartedly regret these comments though they in no way deserved the subsequent retribution dished out to our team.”

“Even if I did refer to the place as being bordered with 10 inch tall stripy nonces and bender strips.”

It’s thought that nobody really cares what caused the accidents in the first place because Ferrari won the race and Force India blah-blah, whatever anyway.