The Mclaren Honda MP4-30 is to be the centrepiece of top Derbyshire be-tracksuited rollercoaster habitat, Alton Towers.

The Japanese-powered Woking clown car was previously considered merely a mediocre automotive embarrassment but after Jenson Button labeled just 30 laps in it at the Spanish Grand Prix the scariest of his life, the now graphite coloured shitbox has been found a new home at Britain’s premier cheap thrills theme park.

Head of Centrifugal Fun Chris Kiwomya said, “we are always on the lookout for exciting experiences designed to exhilarate and stimulate our customers to spontaneous self-defecation.” 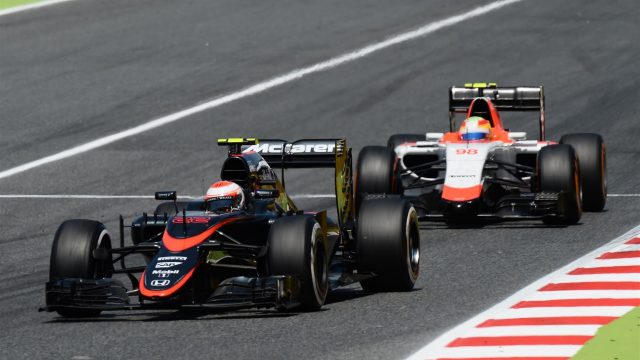 Guess which one of these rattles your teeth out of your head and makes you want to cry?

“So we were delighted when we were contacted out of the blue by a Mr Dennis and offered the opportunity to have as our centrepiece, F1’s latest and most exciting underwear despoiler.”

Mclaren’s 2015 F1 challenger was thought to be a gutless, anaemic engine enveloped in glittering, state-of-the-art aerodynamics.

But it turns out they couldn’t get the second part right, either.

So far from being like trying to drag a 2013 Red Bull through a swamp, driving it is more like trying to wrestle a Citroen 2CV whilst falling down the stairs.

“I’m asking all punters to start setting their laundry baskets to Defcon 1: just as soon as we can get the useless fucker to actually start.”

Hamilton off tits on Tangfastics