Pastor Maldonado’s Lotus is so traumatised by the Venezuelan’s abuse of it, observers fear the car has taken to self-harming.

The 30 year old’s black and gold shitwagon was barely 20 laps into the 2015 Barcelona race before the rear wing started to collapse.

But when video footage refuted the traditional Pastor-sourced defenestration reason, commentators speculated the hedge fund billboard had taken to dismantling itself as a substitute for its unexpectedly absent Death Race 2000 impression. 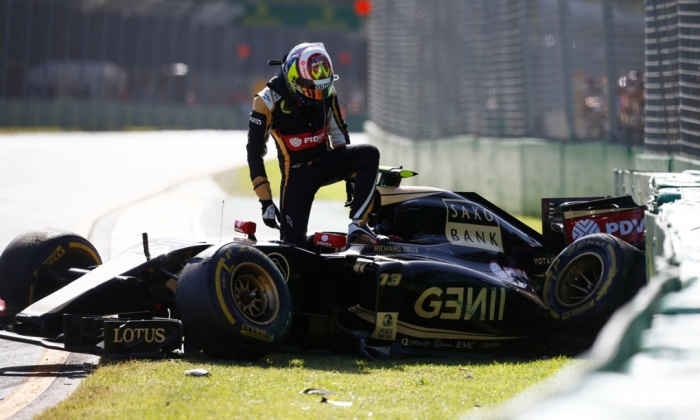 “The consequent lowering of [the car’s] self-esteem is such that normalcy now exists only in the realm of being smashed into other cars at high speed.”

“Thus, in the unlikely event Pastor hasn’t driven into a fellow competitor within the first 10 minutes of a race, the car’s havoc-absence anxiety manifests in a self-destruction reflex to maintain its fragile sense of self,” she explained from a psychiatrist’s couch.

Lotus has had a traumatic recent history: first being smashed up by a Frenchman who looks like a real life but somehow still less convincing version of Beaker out of the Muppets before Maldonado was strapped into it last year.

Which is basically like handing a blowtorch and a pair of pliers to Tony Soprano and asking him to be your dentist.

“The only way the E32 can reverse its self-destructive behaviour is for the destruction to come from Pastor again,” Fannyhampers added.

“Or driven so slowly and gently it’s lulled into a sense of stupefying somnambulance: but that person would have to be so incapable of driving at speed you’d barely know they were a racing driver,” she added whilst jabbing at a picture of Carmen Jorda.