Nico Rosberg has insisted Lewis Hamilton has to drive at his pace if F1 is to be at all interesting in 2015.

The 29 year old slightly slower German made the demands after having his arse continually handed to him by his otherwise insufferable team mate.

Said the 2014 World Drivers’ Championship runner-up, “I can only go as fast as I can go. 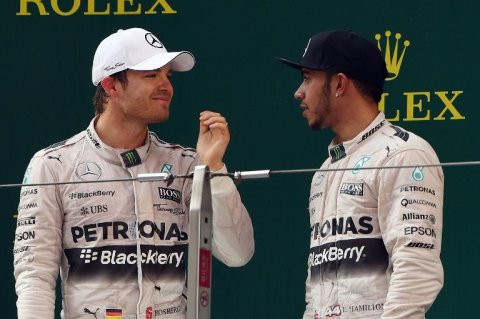 *This* close to doing a shit in your tea

“And because Lewis can go a bit faster I end up only seeing him at the beginning of each race and at the end when I get a face-full of his stupid grin, earrings and tattoos sneering down at me from the top step.”

“And then I want to curl up into a ball and cry a lot,” he explained.

The 2014 Mercedes was so much faster than the rest of the field it was a godsend that both drivers were allowed to duke it out until Lewis’ car finally stopped breaking down and Nico started shitting himself that was happening.

“Lewis has a responsibility to the team and to the fans,” continued the professionally blow-dried German.

“Ride the brake a bit, miss a couple of gears – I don’t care how you do it just stop going so bloody fast.”

“Maybe think about what you’ve turned into: couple of accidents might make the whole thing thoroughly entertaining,” he added.

GP2 engine to “have words” with Alonso