The 33 year old hit a wall during F1 testing in Barcelona but despite the relatively low speed accident has been suffering from a “headache” for several days, keeping him out of the cockpit of a car he’d otherwise be dying to slip into at every available moment.

Said a spokesperson for the Fastest Beard in Motorsport, “Fernando is not feeling very well – honestly.” 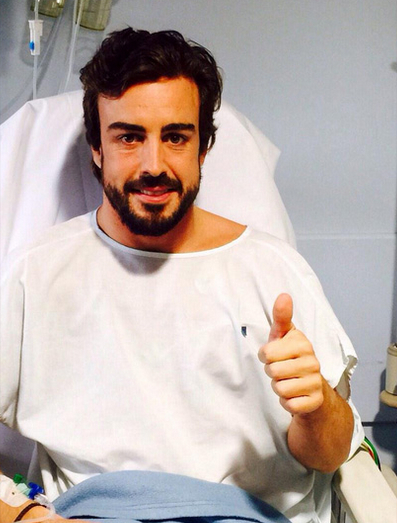 For God’s sake; nobody tell her where I am

“The new Mclaren is really, really lovely: terrific. Nothing wrong with her at all: she’s great, in fact.”

“But he does think it would be better if they kept apart – just until he gets his head together.”

It demands its drivers and engineers be there 24 hours a day but then refuses to fire up or breaks down and has a massive strop just because it was asked to maybe just think about doing say, more than 10 laps in a row: or is even that too much to ask?

“Fernando is entirely committed to Mclaren – certainly for an indefinite period,” the Spaniard’s spokesperson continued.

“Albeit an indefinite period time which could well end when, say: a Mercedes driver is involved in a freak motorway accident, firearms tragedy or bizarre poisoning episode.”

“To pick some events entirely at random.”