Major blue chip sponsors have been unable to hand over millions of dollars to Ron Dennis‘ Mclaren team because setting fire to it provides better value.

Massive corporations hungry for exposure and literally sweating money into hordes of golden buckets dotted around under their corporate HQs would nevertheless still rather put a match to the whole thing than see it plastered along the side of a wheezing, malnourished F1 car that used to win things.

Head of sponsorship at Acme Shit-for-Sale, Johnson Stirrups said, “time was when making money was hard in whatever business it is we’re in.” 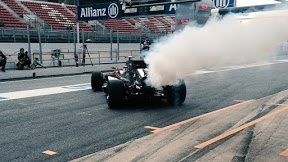 That’s the valuable global brand positioned the shit out of

“But thanks to globalisation, offshore tax havens, nom-dom status and some other stuff I and my fellow flush executives have zero comprehension of, we literally can’t stop making the stuff.”

“We’d still however rather fly the board to Mauritius on a jet made of gold and stick a match under most of it than hand even a single fivcr over to Mr Dennis’ Williams emulator project,” he explained.

Mclaren’s Chairman and CEO had been comparing his team to record league winning current footballing carthorses Manchester Utd in an attempt to get everyone to see that they were good once and could be that again possibly, yeah so please, please, please can we have a blank cheque?

“Setting $50 million on fire will be irresponsibly delicious and provide light and heat for at least an hour – possibly more depending on the denomination notes we use,” Stirrups continued.

“Whereas the only light and heat we’d get out of a Mclaren Honda is when the engine blows up and instead of irresponsible deliciousness we’d have to speak to Ron Dennis every 2 weeks,” he added.