Germany has decided Hockenheim will be the backdrop for their Teutonic declaration of F1 ‘meh‘ in 2015.

The nation spent years not giving zwei Hartgekochtesei for the sport before embracing it with ruthless efficiency during Michael Schumacher’s domination. Recently however, the European nation most famous for its cars, sausages and hard core pornography has decided it has better things to do with its 250 – 700 Euros, vielen Danke.

German observer, Otto von Dambusters said, “for all their apparent rationalism, Germans are a remarkably fickle bunch: especially when told the price of peering at primadonna sports stars sitting in tiny farting go-karts 400 yards away is the same as a Bayern Munich season ticket.” 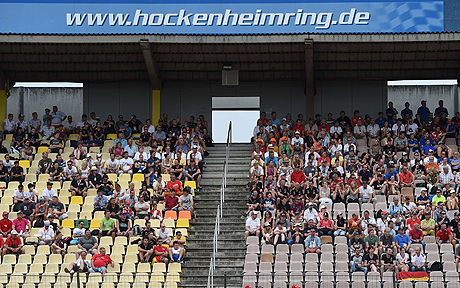 “At this point they tend to get rather angry with the powers-that-be in Paris though fortunately, not to the point where they’ll invade.”

“Not any more at any rate,” he added.

Germany has an embarrassment of riches when it comes to venues suitable for hosting hardly anybody spunking a week’s wages up the Fatherland’s F1 race, including the aforementioned Hockenheim, the Nurburgring and that one between 2 cones set on a motorway.

“Michael would smile, win, destroy his team-mates and the Volk were happy again,” Dambusters continued.

“And if only Sebastian had remembered the golden rule of only racing against pre-nobbled, 2nd rate team-mates there would be more than 100 people and a sausage dog called Rudi come July.”