Maintaining a beard for an entire season at Mclaren is Fernando Alonso’s final and most important motorsports challenge, their newest recruit has insisted.

Sporting the full on D’Artagnan or, “semi-Roy Keane“, the 34 year old made the defiant statement in the very nexus of his new team’s anti-hirsute battle station; the Mclaren Technology Centre.

“Some say achieving multiple F1 World Championships is the hardest, most valuable thing in motorsport but there is one thing harder and more valuable even than this,” the Spaniard intoned with tremulous voice.

“Lasting an entire season at Mclaren without shaving.” 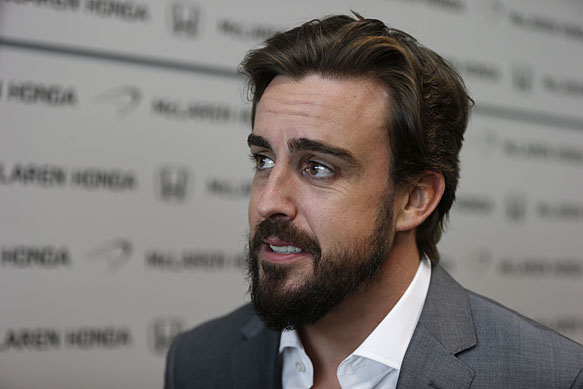 At least if this doesn’t work out, The Joy of Sex will have me

“If I can go from Australia to Abu Dhabi without once reaching for a Gillette Mach 3 or Wilkinson Sword Hydro 5 Power,” he explained; thin beads of sweat quivering upon his forehead, “it will be an even greater achievment than vanquishing Michael Schumacher for my second Championship, 8 years ago,”

Famously insisting on the straightest of straight lines, whitest whites and shittest hashtags, Ron Dennis has ruled Mclaren for over 30 years with some of the closest shaved men and women in the paddock.

Maintaining even the slightest upper lip fuzz or 2 day old stubble is close to insubordination for the 67 year old Chairman, with the inability to grow either one of the main reasons Kevin Magnussen was nearly kept on.

“The Honda is going to be a gutless, wheezing ramshackle deadweight bolted onto yet another lumbering juggernaut with all the fingertip precision of a shopping trolley dragged from a canal,” continued Alonso.

“Finishing top 6 will be a bloody miracle; as will keeping this to more than a five-o-clock shadow,” he explained, running his hands through his thick, Andalucian bristles.

“But at least I’ll have something realistic to aim for,” he added, choking back a sob.