Lewis Hamilton is getting a spare face with a magnanimous expression made in case he loses the F1 World Drivers title to Nico Rosberg.

The 29 year old has attempted to look like he totally accepts every now and then getting beaten by his German counterpart but instead can only pull a face like the one he did every Christmas when his nan knitted him a bright green jumper with a reindeer on it he had to wear for the rest of the festivities.

To this end he has engaged the services of top special effects gurus who have worked on some of the biggest Hollywood blockbusters like Mission Impossible, Face Off and Scooby Doo. 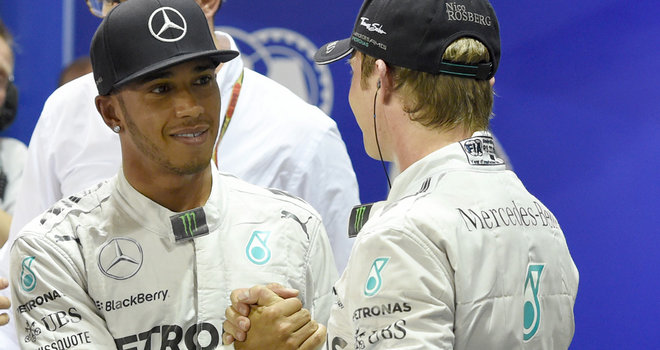 Said the lad from Stevenage with a face like a bulldog chewing a wasp, “every time Nico beats me I get a feeling like hot lead being poured into my stomach by a man dressed in a Ku Klux Klan outfit.”

“But for marketing purposes and so I can afford some more big watches I have to look like a waitress just accidentally spilled my coffee – most of which went over Nico.”

“Which is physically impossible for me,” he added.

The face is currently getting pummelled into shape by an artist from Baha New York Alberquerque Texas Minnesota California and should be ready in case it’s needed for any ensuing podium commiseration humiliations.

“It’ll look great – and by great I mean convincing.”

“And by convincing I mean as long as you can’t here me sobbing uncontrollably underneath it,” Lewis expained.

Whatever happens, I will still be World Champion of bellends says Hamilton