Mclaren have accidentally landed Marc Marquez for the 2015 F1 season.

Returning chairman Ron Dennis droned on, “despite what it might look like, Mclaren are committed to excellence in every area.” 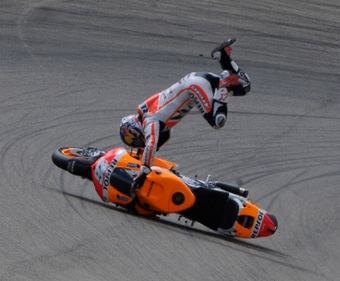 All I said was, “I’ve got a Mr Dennis on the phone for you”

“We are therefore delighted to announce Marc into the Mclaren fold as the supreme champion someone just told me he is.”

The former Grand Prix winners had looked to strengthen their driver line-up ahead of its 2015 Honda tie-up, making approaches to anybody with a World Drivers’ title to their name once Dennis had been reminded Ayrton Senna was dead.

The Repsol Honda rider was standing too close to the team’s whirlwind recruitment strategy however, and was accidentally sucked into a multi-million dollar, multi-year contract.

“It’s an easy mistake to make, especially with young Marc stood there in his Honda leathers with a garland round his neck,” one pundit explained.

“In fact, it nearly happened back in ’93 with Mick Doohan.  They managed to swap him for Michael Andretti in the end but it was a close run thing.”

“As well as a complete fucking disaster, obviously,” he added.