F1’s governing body are to make drivers push their cars round the remaining Grand Prix tracks.

The FIA said they were ruddy sick of all these highly paid prima donnas prancing about the globe like the great they are when all they were doing was driving cars that was easier than like doing Nintendo XBox or something.

“Let’s see how hard they look when they’ve got no help from anybody – including the internal combustion engine,” head of the FIA’s making-it-up-as-they-went-along committee, Jean Todt explained. 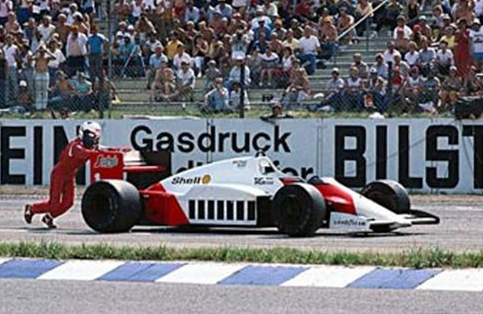 “These kids swan in here dressed no better than common or garden heating engineers, being all oighty-toighty just because they think they can drive faster than everyone else: well, we’re all sick to the back teeth of it – what do they think this is?  The 21st Century?”

In-car footage suggesting modern drivers demonstrated less skill steering a car round a track than a supermarket assistant navigating produce over a barcode scanner has damaged F1’s reputation as the pinnacle of Motorsports excellence.

Whilst radio instructions about which engine settings to use, mirror to look at and direction to go in were the last straw for the governing body, determined to make F1 harder even than Gran Turismo on the professional level with the crash settings off.

“Which if it keeps Susie Wolff out of a cockpit, can only be a good thing if you ask me.”