The high finance twats announced the re-assessment following the German’s latest, ongoing humbling at the hands of his pantomime horse team-mate, Daniel Ricciardo.

Chief Analyst, Hector Vector explained, “there was always some doubt underlying the intrinsic value of these assets owing to the uncertain contingent but divergent influences of a bald man with a lisp and a hirsute Australian gentleman wielding a fierce stare.” 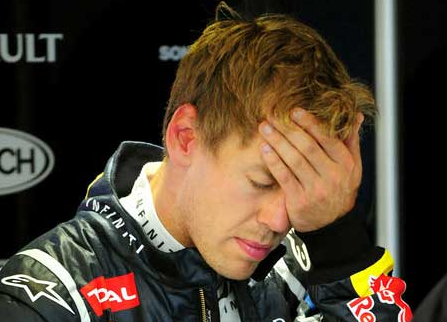 An Australian: why did it have to be an *Australian*?

“Recent developments concerning the relative performance of related asset Ricciardo have however led us to the conclusion that the Vettel performance was largely artificially inflated.”

“We have therefore downgraded the intrinsic value of asset Vettel and accompanying equity acquired between 2010 and 2013 to Shite,” they concluded.

Despite some suggesting the asset was over-leveraged, consistently high returns over the next 3 years saw the stock soar in value to the point where some claimed it was worth as much as a historic Schumacher and still others hinting at future Senna yields.

But recent performance slumps have caused analysts to re-assess their estimates with some writing the German down as low as 1 and a quarter Chiltons.

“Look: we’re allowed to get stuff wrong some of the time,” Vector added.

“Just as long as we get to know about it first so we don’t lose any money.”