Some of the 2014 F1 races have been won by Daniel Ricciardo in a Red Bull, it’s been revealed.

The 25 year old Antipodean crossed the finish line before anyone else in up to 3 of this season’s races without anybody noticing; despite having so many teeth he can veer ships onto the rocks by simply grinning near a cliff top at night.

F1 expert Valerie Schnorbitz broke the news saying, “I’ve been watching Grand Prix racing for up to 3-and-a-half years and I’ve never seen anything like it.” 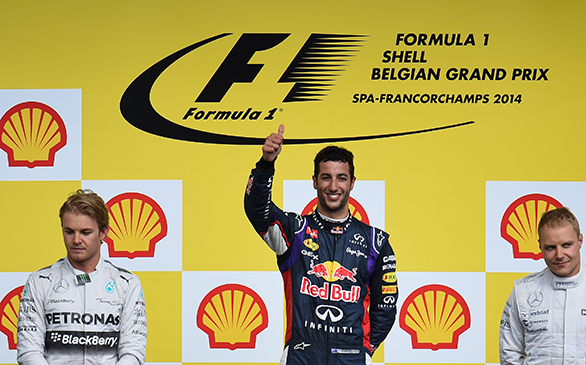 “Apart from all the times I saw Vettel win – which admittedly – *was* fairly similar and most of the time,” she added.

The shocking revelation emerged when an eagle-eyed viewer noticed the top step of the podium at the recent Belgian Grand Prix wasn’t occupied by a man dressed like a teenager in a Cyber Man jump suit tribute.

Rewinding a series of unmarked video tapes, he became astonished this feat had then been duplicated on two other occasions; currently being verified by a team of internationally qualified independent observers.

“F1 scientists and scholars were adamant 2014 has been entirely dominated by Mercedes GP and their 2 antagonistic driver-fighting bots,” Schnorbitz continued.

“But it turns out an impossibly young man working for a fizzy drinks company has snuck in front of them without anybody noticing on at least a couple of occasions.”

“A fizzy drinks company I tell you! how fucking mental is….oh: hang on?”