It doesn’t matter how many wins Mercedes rack up this year, nobody’s going to be suckered into buying a Blackberry, consumers are saying.

The Silver Arrows juggernaut has swept all before it in 2014, winning 7 out of the opening 8 races.

But their innovative engineering and almost bullet proof reliability are fooling nobody into thinking their mobile phone sponsors have anything to do with it. 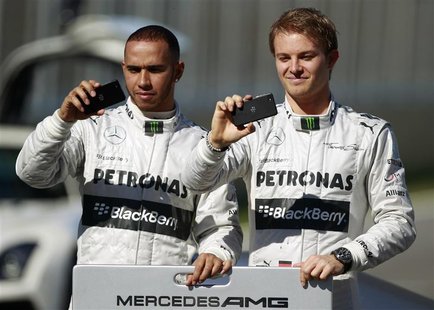 At least if you turn it off, you can see your face in it

“But I’d have to be thicker than a herd of pigs trapped in a Glastonbury waste pipe to buy a Z10 over a 5S, Galaxy 4 or HTC One,” she explained.

Blackberry were once at the cutting edge of mobile phone technology but fell behind their faster-moving competitors and before you could say “Sam Michael” were wheeling out sub-standard boxes of shit even fuck-witted mid-west Americans wouldn’t be seen dead removing from their cell phone holsters.

“Look: it’s got a timeshift function on the camera and…Kate Moss had one once and…how does this flow function work again?” said a spokesman wondering why he turned that Motorola job offer down.