Pastor Maldonado has admitted he must up his game in Austria if he’s to retain his status as F1’s top psychopath.

Speaking after Sergio Perez‘ kamikaze swerve nearly took out half of downtown Montreal, the 29 year old admitted he couldn’t afford to sit on his lunatic laurels with such a cavalcade of violent talent on the grid.

“For sure, Canada was disappointing for me,” admitted the haunted tree lookalike. 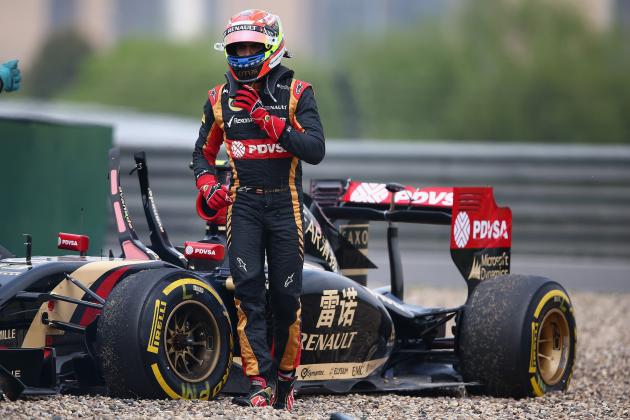 My work here is done…

“I only picked up 1 fine and had to retire the car before I could embed it in one of my competitor’s heads.”

“Sergio reminded everybody of why he’s such a threat; to A&E especially.”

After a relatively benign 2013, Maldonado began the 2014 season in a shower of carbon fibre as he looked to regain F1’s unofficial biggest nutter crown.

But Perez’ malevolent steering risks putting paid to the Lotus driver’s attrition ambition as the Mexican’s Canadian calamity shot him back to the head of the Top Trumps Shunters.

“It’s easy to say Sergio is my biggest rival but you’re only as good as your last asinine accident,” the Venezuelan continued.

“It could come from anywhere; Kobayashi, my team-mate, Chilton.”

“All it will take is Lewis to properly lose it with Nico and all my efforts will look like a CeeBeebies re-make of Wacky Races,” he added.