The Red Bull Racing Formula 1 team is possessed by the spirit of Karora, a creator God from Aboriginal mythology.

Daniel Ricciardo’s 2nd straight catastrophic race after being disqualified from the season opener in Melbourne made it clear white Australians aren’t welcome at the fizzy drink team with Aboriginal spirits the number one suspects.

Didgereedoo bothering alleged pederast, Rolf Harris said “Aborigines have for thousands of years constructed a mythological catechism around the natural world to create meaning for the environment they inhabit.” 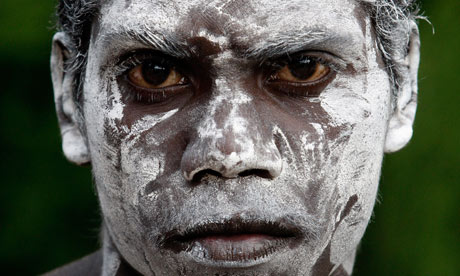 We fucked up Alan Jone’s diet regime as well

“Layering the whole of Australia’s topography with cultural nuance and deeper meaning they empower selected audiences through story with the accumulated wisdom and knowledge of Aboriginal ancestors back to time immemorial.”

“So when a bunch of Ozzies turn up raping and killing most of them before pissing beer all over their sacred landscape, this tends to annoy them somewhat,” he explained.

It’s thought that Aboriginal elders got together and put a hex on the Red Bull team having successfully identified Mark Webber as a member of the hated race; successfully condemning the 37 year old and any subsequent white native of the land of Ayers Rock, barbecues and institutionalised sexism.

“Whenever a wheel fell off, gearbox broke, tyre deflated or FIA dictat was applied unfairly you can bet Karora was behind it,” Harris continued.

“Or: failing that, it might be Alastair Cook stabbing that voodoo doll he bought on the last England cricket Caribbean tour – one or the other, I expect”.