Thanks to the reduction in engine noise, Sky Sports F1 have suddenly realised what is coming out of Natalie Pinkham’s mouth.

The discovery was made when one of the broadcaster’s executives turned on the television and became aware of an incessant droning noise over the top of their coverage.

It was only upon tearing himself away from Pinkham’s cleavage that the executive realised it was coming from the presenter’s mouth. 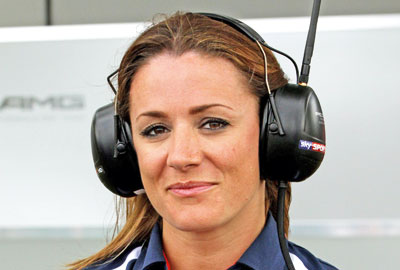 It’s alright for you love; where are our ear defenders?

Williams technical head, Pat Symonds said, “I used to get a massive boner when hearing a Formula 1 engine.”

“But I can barely muster an agitated semi with these new-fangled turbo engines.”

“It sounds like half a dozen dozy bees trapped in a jam jar and I for one have rarely found buzzing insects sexually arousing – however dramatically coloured,” he explained.

The former researcher on Ready Steady Cook, began work on the motor sports channel in its 2012 debut year; swiftly becoming the primary spandex or plunging dress clad presenter once Georgie Thompson was sacked.

But now the ear-splitting shriek of high revving V8s has been replaced with a warbling turbo V6, the channel’s paymasters are horrified viewers can now hear the small selection of words the ex-Men and Motors presenter can conjure up at the drop of a badly written cue card.

“I used to really admire Natalie,” one fan commented.

“But now I can hear what she’s saying, I think I may have confused admiration with cheap sexual titillation.”

“You know: like all the Sky executives that originally hired her.”