Daniel Ricciardo has thanked his Red Bull team for allowing him to pretend that he deserved to stand on a wooden plinth and wave at several hundred briefly elated fellow Australians.

The ex-Toro Rosso pilot apparently took his new mount to 2nd at his home race only to discover long after the locals had thanked the fucking Lord an Ozzie wasn’t going to fuck everything up again, that his team had fucked it all up instead.

But far from being disappointed, the bloke who looks like a donkey catching sight of itself in a mirror for the first time revealed subterfuge was really what he was into. 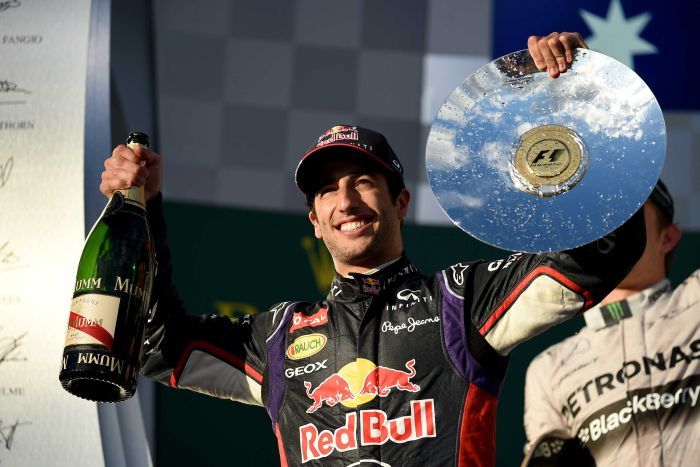 Suckers! I’m keeping these, too

“It had always been my dream to stand on the podium at a Grand Prix,” the Red Bull driver explained.

“But even more than that, I’ve fantasised about achieving it entirely fraudulently just so I can dishonestly milk the applause and thereby feel massively superior to, a bunch of gullible fuckwits.”

“If they could be fellow Ozzies too, that’s even better,” he declared.

The 24 year old revealed his dishonourable dreams of glory were sparked by cycling’s very own Shimano of shame, Lance Armstrong.

“Lance was the greatest,” Ricciardo continued.

“All those Tour de Frances; everyone thinking he was the best cyclist the world had ever seen and yet every single day absolutely ripped to the tits on re-oxygenated blood and wacky pills, pissing himself at everyone else thinking it’s genuine.”

“Now: try and tell me that’s not classy,” he added.