Martin Whitmarsh is still hanging about somewhere or other.

The now ex-Mclaren Racing CEO was replaced by uber-Mclaren boss, Ron Dennis in January and hasn’t been seen in public since.

It’s thought he might be hiding in a box somewhere or maybe a cupboard but until he shows his face everyone will just have to accept he’s alive and well and therefore still a potential nuisance.

Paddock pundit, Bough Godfrey said, “a man like Whitmarsh thrives on being at the hub of complex, high pressure environments where he can busy himself fucking everything up left, right and centre.” 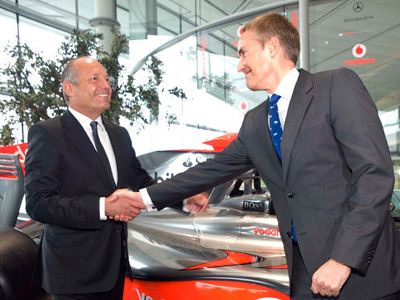 “Once Mclaren removed him from this environment however, the trauma would appear to have triggered a hide/flight instinct and it’s anyone’s guess where he may be now.”

The 55 year old has been a Mclaren stalwart since he joined the company in 1989.

He enjoyed some of its most successful years ever until taking over in 2010 and immediately putting a stop to all that.

“It will be well funded and run with a disciplined, expert and dedicated staff committed to something important and high profile he can then go and ruin.”

“Which means he’s probably not at Lotus,” he added.

Channel 4 not seen F1 before