Ferrari have built a time machine to send the new season ending double points rule back to 2010.

The numbskull proposal was revealed to have been backed by the Scuderia shortly after it had formed, like a bump on the head, via F1 boss Bernie Ecclestone’s mind.

But the backing for the loony tunes ending isn’t as many apples short of the picnic it might appear the Italian team argue; especially when you take a look at what they’ve got in this top secret garage. 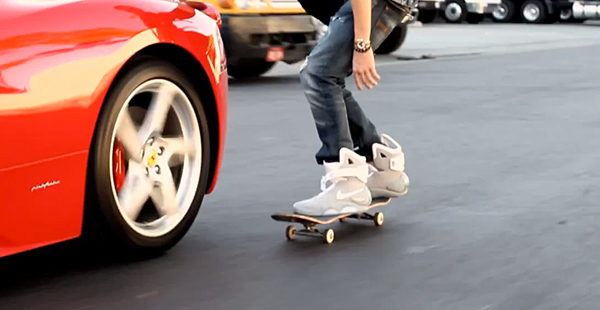 Badoer doesn’t ask why: he just does

“But it also would have won us the championship 4 years ago which is where this comes in,” he added drawing a white dustsheet back from the contours of a 1980s automotive icon.

Wolf went on to describe how the spaghetti-munching losers could still pluck victory from the jaws of a defeat which itself had been plucked from victory at the season-ending Fernando Alonso Abu Dhabi clusterfuck, back in 2010.

“This is what’s called the Flux Capacitor,” Wolf continued, pointing at 3 lightbulbs attached to a hairdryer in the boot.

“And it does something time-related. Perhaps it creates a wormhole into which all matter is super-condensed such that even time itself can be manipulated much like a physical space not just a fleeting, ineffable moment that is gone forever once passed through?”

“Or maybe some bright lights come on, everyone gets excited and when we can finally see through the smoke and noise we realise the car is on fire? How the fuck should I know? I was only an actor on kids TV 30 years ago,” he continued.