Mercedes have had to get Lewis Hamilton to fuck the nose of their new W05 car up as they hadn’t realised that’s what the 2014 F1 rules demanded.

Running first at the inaugral 2014 test at Jerez, the British former World Champion speared off the track almost immediately, completely fucking the front of the car up albeit at the same time making it look like every other challenger.

Inadvertent aesthete, Mercedes technical director Paddy Lowe said, “you get these rules and you try really hard to apply them absolutely perfectly and – what happens? – you realise you’ve really major league ballsed it up as yours is the only one that doesn’t look like a dog took a shit on it first.” 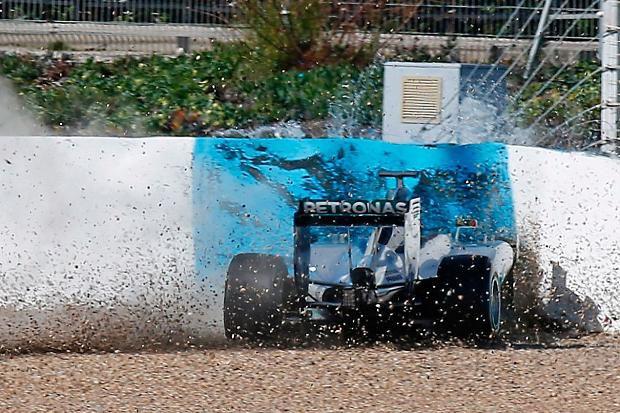 “Maybe if we’d had time we’d have got one of our guys to smash the shite out of it with a big hammer first but we didn’t so: what can you do? We told Lewis to tank the fucker so we can sort it out in the garage,” the Irishman added, so he did.

The 2014 regulations are said to be some of the most radical in living memory, provided you were old enough and dull enough to have bothered remembering any of the previous ones.

But it’s resulted in some machinery that, by comparison makes that 1995 Mclaren look like a blood red Lancia Stratos with Claudia Schiffer draped over it covered only in honey.

“Lewis did a good job, we can go out tomorrow like this,” Lowe continued, pointing at the utterly twatted front end.

“Or if it’s too fucked we can get Nico to do brrm, brm noises with his mouth while we keep the doors shut. Judging by the sound of these engines nobody will be able to tell the difference anyway.”