The specialist motor racing press assume Corinna Schumacher isn’t including them in her demands for the media to leave her family alone.

Journalists from proper, respected motorsport titles shook their heads in mutual condemnation of the vultures clogging the 7-times champion’s Geneva hospital who made it much harder for them to get a decent cup of coffee as they waited for the results of the German’s latest CT scan.

Autopiss scribbler, Gus Bellends said, “these so-called journalists come here from their national newspapers with their press accreditations and journalism awards but do they know the last race Michael won or how many points he racked up in his career? Do they fuck.” 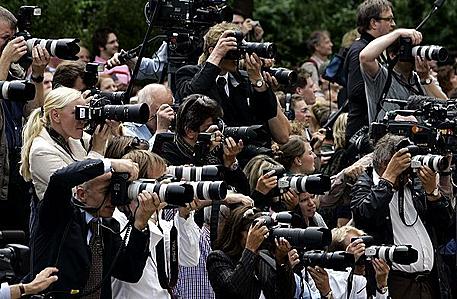 Is it still intrusion if we use these long lenses?

“They’re just rubber neckers with pencils. Whereas I’ve been following Michael’s career for over 2 decades and have a right to be at the head of the queue should he peg out,” he explained.

Schumacher crashed whilst skiing in the French resort of Meribel shortly before New Year and has been in hospital in a coma surrounded by family, medical personnel and about 300 cunts wildly speculating about his condition ever since.

“I was there in ’94 when he won his first title,” Bellends continued.

“I wrote about what a totally worthless piece of shit human being he was who would one day reap the seeds of his own destruction”.

“Funny how things turn out, isn’t it?” he added.

Not really your mate, Hamilton told