Mark Webber’s purge of his web information also deleted a love letter to erstwhile hated team-mate, Sebastian Vettel at least according to one fan.

F1 advocate and self-confessed web expert, Stench Diesel told us, “Mark thought he was being clever posting then immediately deleting stuff as he knew his opinions would be broadcast but in a way that made it look like he meant them to be private.”

“But he can’t have been all that smart judging by what I found.”

The out-of-work security guard claims to have spotted the errant romantic paean when the retiring Red Bull pilot published then immediately took down a host of damning comments on his own website. 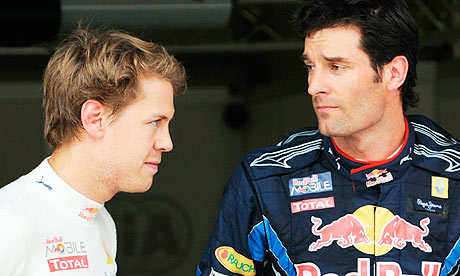 But if the 9 time Grand Prix winner thought he was being clever he hadn’t allowed for the “black hat” web skills of the 42 year-old divorcee from South Shields.

“The stuff about Horner and Marko I expected,” Stench began.

“What I didn’t expect was an unformatted Word Doc called, “Oh Pretty German chick; How I Ache for your Peck of Passion, however.”

The father of 5 currently with a restraining order not to go within a 1 mile radius of Oxford’s Blackbirds Leys Estate explained what he saw.

“It was pretty incredible: he may talk the talk of an embittered athlete vanquished, then humiliated by his younger more gifted opponent but some of the things I read wouldn’t look out of place in a hard core gay pornographic magazine,” Stench continued.

“Not that I know what that would look like; as I proved to the judge, those periodicals could have come from anywhere as there’s no way I would have let my children get anything like the access to them my wife was suggesting.”

But whilst a sceptical press has questioned the veracity of the claims, Stench is sticking to his guns.

“I know it seems unbelievable but all I can ask people to do is be open minded,” he explained.