Mark Webber’s ancestors must all have been arseholes, karma experts have concluded.

The 37 year old Unluckatron once again failed to finish at the weekend when his rarely functioning car was taken out by a German playing at Dukes of Hazzard.

In a career of nearly 200 races this brings the total number of retirements for the Australian to a dizzying 5,930, leading many to speculate about the cause of such outrageous fortune. 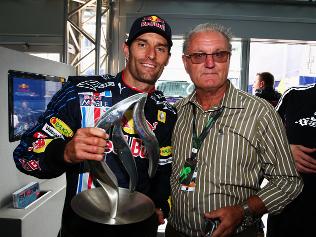 Karma expert Boy George said, “it is simply impossible for a human being to attract as much bad luck as Mark has – though I suppose Brundle having to commentate with both Crofty and Jonathan Legard runs him a close second.”

“The only possible explanation is the karmic interpretation of fate being a series of past life misdemeanours visiting misfortune upon the current generational incumbent.”

“Which is pretty fucking mental when you think about it,” he added.

Webber’s succession of preposterous DNFs have led several to consider the nature of the Antipodean’s ancestors, in light of the possible karmic connection.

“When his wheel fell off in China I wondered whether a great grandparent may have robbed a bank with a wheelbarrow,” considerer John Braindead told us.

“I changed my mind when the gearbox packed up in Singapore and with Korea I’ve now just come to the conclusion his family must just be packed full of wankers and tosspieces.”

It’s thought that Bernie Ecclestone’s descendants are all fucked.

Being beaten by Australian most humiliating thing imaginable, say scientists