Marussia are concerned the image of their car on fire slowly going backwards into a polystyrene bollard is too obvious.

The symbolic self-destruction of Jules Bianchi’s mount last Sunday was either a costly retirement or a 6 foot high neon-lit advertisement for where the team is currently.

Team head John Booth said, “everyone’s divided at the moment between the ones embarrassed the 3 minutes of consecutive TV footage we’ve finally achieved is because our car slowly trundled backwards down a hill whilst on fire.” 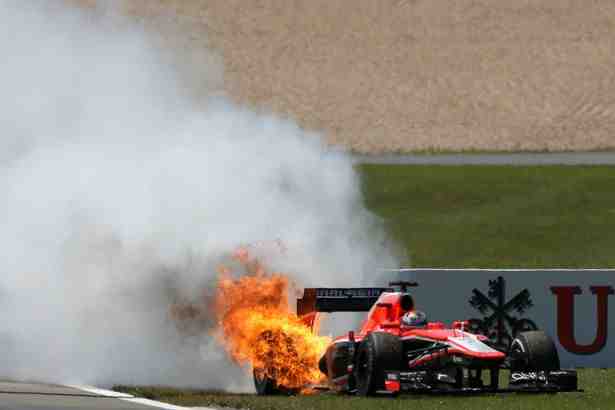 “And those who think it’s a powerful visual metaphor for the state of the team and find both the strength and subtle dexterity of the conceit emotionally resonant.”

“If nothing else, this will be very useful poignant footage for over-worked TV editors when we inevitably go bankrupt,” Booth continued.

Meanwhile, researchers at Sky have been instructed to find as many recordings as possible of Kobayashi crashing his Sauber, Sergio Perez waving and smiling from a podium and Nico Hulkenberg sobbing and banging his head on a glass coffee table.