Nigel Mansell believes the tyre blow outs at Silverstone last week were all tributes to his famous 1986 title decider.

The former World Champion had been observing the 57 lap race from the safety of his own restraining harness when Lewis Hamilton’s tyre suddenly deflated with barely 10 minutes of the race completed.

Felipe Massa’s similar failure shortly afterwards caused unmistakable eyebrow levitation on the 1992 World Champion but by the time Sergio Perez’ left rear disintegrated on lap 46, ‘our Nige’ was in no doubt something other than sheer coincidence was going on. 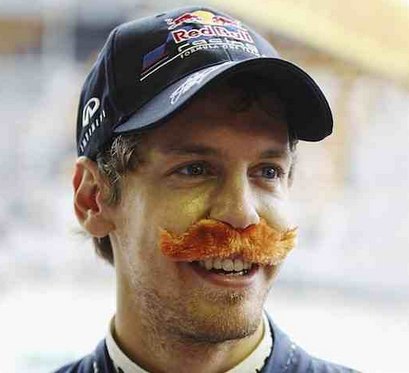 “This whole situation is obviously very emotional,” he told reporters too naïve or stupid to be standing within earshot.

“It’s clear this isn’t chance: 4 punctures, all on the left rear. I’m truly touched these drivers remembers that famous day nearly 30 years ago.  Each and every one of these commemorative punctures touches me more than my massive moustache allows me to demonstrate,” he whined.

The 59 year old famously lost out to bitter rival Prost at the Australian race when, whilst running 3rd, his tyre exploded erroneously upsetting millions of fans yet to figure out what a colossal cockwand the Brummie was.

“Any other date, I might have thought it was a series of coincidental, potentially horrifying accidents but it’s the 9,724th anniversary day which made me realise,” Britain’s top 80’s sports moustache continued.

“Not that I’m counting or anything.”