Sauber are to replace CEO Monisha Kalternborn with the character Ludmilla from Rocky 4.

Putative head Peter Sauber, thanked the 42 year old for her work whilst welcoming the sadistic Soviet-philic wife of “Siberian Express” boxer Drago from the hit 1984 film.

“I am delighted to announce the appointment of Ludmilla, a.k.a. Brigitte Nielsen out of Rocky 4 as our new CEO,” the cigar chomping Swissman told reporters. 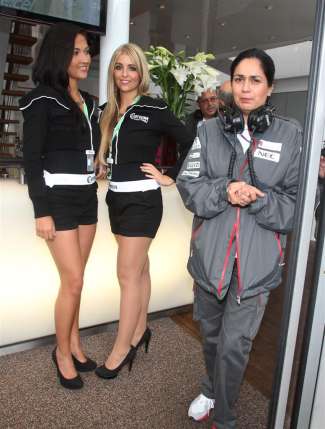 Abramovich will be along in a minute

“I would like to thank Monisha for her contribution to the team but the new owners felt a fresh face was needed to take the team forward; in this case a 6 foot 1, buxom, blonde one with a penchant for sadism and low cut tops.”

Following a shortfall in promised funds, the 20 year old independent team were forced at gun point made an offer they couldn’t refuse and decided to take on backing from 3 separate Russian companies.

“We are still Sauber and always will be, “ Sauber continued.

“No matter how much potato vodka we now have to serve in the canteen, violent ex-KGB thugs hired to do security, shitty Russian drivers we have to put in the cockpit, the red, white and blue livery and…yeah, alright.”

“Look, it was either that or find out how much Polonium it took to make the rest of my hair fall out, alright?”

Man with Silverstone tickets thanks the Lord